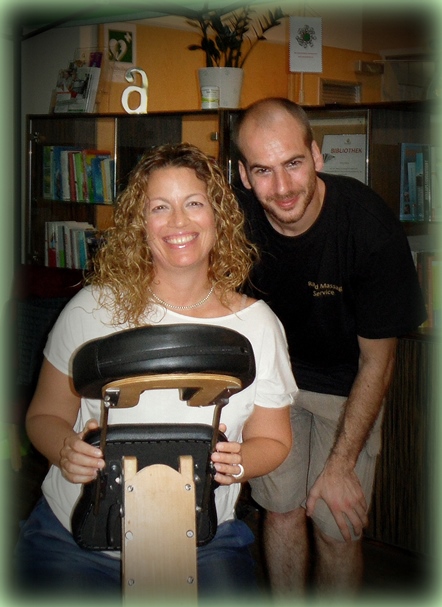 From the monotonic load of sedentary work, and from chronic stress, the muscles become permanently tense. During a general refreshing massage treatment, the more the masseur can relax his patient’s muscles, the more his work effectively. The different massage techniques relax the muscles on their own, but if the therapist is conscious and trained enough, with some coordination, she/he can use the passive momentum of the muscles – which he/she generates with his/her work – to help the relax even more and make his patients even more satisfied…

When the muscles are rest, then they have a certain amount of tension. Its called normotone.

Ideally, the muscles are relatively loose at this point, and the biggest force they have to resist is gravity. Gravity gives a tone to the muscles by itself. This is also evidenced by the fact that astronauts have much looser muscles and atrophy much sooner – in the state of weightlessness -, than the other humans muscles on Earth – with weightness.

That sounds good, but what has this got to do with massage?

During the massage, the therapist works with the normotone of the muscles – if the patient does not move during the treatment. The normotone will become tensed under stress and monotonic loads, what I said. Basically, the work of a masseur is about resolving this tension. However, his work is made more difficult by the self-weight of the muscles caused by gravity. Gravity is a constant force, and “forces” the muscles to a certain level of tension by giving them weight.

However, knowing the secret of momentum coordination, a trained therapist can temporarily reduce the effect of gravity on the muscles to relax them even more.

This practical method requires a great deal of concentration from the masseur; but in return is an easy, soaring feeling for the patient that cannot be compared to any other. Often both of them have their mouths open. Masseur’s from concentration, patient’s from experience.

Momentum coordination is a method, an execution technique, in which the masseur consciously directs the momentum generated by his work to reduce the weight of the muscles, in order to make their normotone looser and more manageable.

This method works better in practice, or can be performed with several techniques, if the patient is sitting in a massage chair and not lying on a massage table. This is because on chair the therapist can move more muscles in the vertical direction, so gravity also helps to create and maintain momentum.

But how does it all work?

Every muscle has a limit of stretchability. When you touch a patient’s muscle, you can move it in certain directions to a certain limit. As soon as you reach this limit and let go, the muscle – like a rubber fiber – swings back to its original position.

When this swing back occurs, the muscles – due to their momentum – go into a free fall-like state for those few tenths of a second. In this state, they lose weight and relax more.

This effect works best in the vertical direction, because then gravity also helps it; however – due to the rubber effect – it also works horizontally. The muscles are in their loosest state at the end of the swing back. Then they need another few tenths of a second for the gravity permeate them again, and they regain their original weight and normotone. If you give the next momentum for the muscle at this momenth, you can treat it in this extra-looser state.

If you can constantly feel this moment with the right concentration, your work will have a steady rhythm. In this constant rhythm you can feel and coordinate the momentum much better. Due to this your patient’s muscles will become noticeably looser and more manageable in shorter time. Therefore, it is an excellent way to increase the effectiveness of your treatments.

In this way, your work is separated into active and passive parts. The active part is when you give the impulse, and the passive is when you let the muscle swing back to its original position. The active and passive parts together form an organic whole, which from the outside simply looks like a massage technique performed in a steady rhythm. Certain kneading tricks of classical sports massage are executed by the sports masseurs also in this way; but mostly they do it not consciously, as most massage schools do not teach this principle.

However, anyone who consciously uses this method – and has good practice in it – can use it in other techniques too – to make his/her treatment even more effective.

The simplest and most spectacular way to illustrate the effect of conscious momentum coordination is a simple arm swing. With a firm momentum, raise the arms of your patient sitting in the chair backwards (active part) and then allow them to swing back from the deadlock (passive part).

In the passive part, just follow the swinging arms with your hands, barely touch them. Just gently guide them so they don’t collide with the chair for example, otherwise let the gravity and the “rubber effect” to do their thing. When they have swung back forward, the active part can begin again with another pulse.

Try to follow the movement of the arms, while you are in constant contact with them; but do not impede their movement when swing back is on. Feel the end of the swing back as well, and don’t hesitate there, but immediately give another impulse backwards.

As a result, the muscles of the arm will be constantly in momentum, so they will relax more and more without massage techniques as well. Anyone can try this at home, not just masseurs.

In the case of arm swing, momentum coordination prevails best, because then we move not only one muscle; but the whole arm, in addition, in a vertical direction, so next to the rubber effect; gravity can also have its maximum effect. However, this method can be used not only for such large and spectacular techniques that affect multiple muscles – or an entire limb.

This effect is also pronounced when we move only one or two muscles (shoulder muscles, calf muscle, triceps, etc).

Comparison of momentum coordination and a traditional method

If you move the muscles to their maximum limits; and you let them completely swing back from there before you give the next impulse; then they lose the greatest part of their weight which is possible. They will be the loosest then, so then you have coordinated the momentum most effectively to achieve your goal. For example, Dynamic Sports Massage – created from the combination of Dynamic Rapid Massage and classic sports massage – works on this principle, and this is why its more effective than the traditional version.

To master the Momentum Coordination Method effectively and skillfully; you should first develop your movement and breathing ergonomics as well as your sense of rhythm. These skills can only be developed through a great deal of practical learning and experience.

Where does the concept of momentum coordination come from?

Between 2010 and 2013, a project was launched at the medical parts of the largest hungarian summer festivals. The aim of the project was to develop a treatment for the medical staff that would refresh them in their long shifts as much as possible in the shortest time. In 2010-2011, this project only went on a test basis yet. In the initial concept, working on massage chair we combined different sports massage techniques with oriental stretching and movement techniques.

After the initial successes, a physiotherapy department was opened in 2012, of which I became head. That year, an entire team of masseurs worked at each festival. We tried to find out how we could be even more effective. How can we achieve an even greater impact in even less time. Our goal – and the request of the managers – was to bring the workers out from their fast-hectic work for the lessest time which is possible.Then came this ‘gravity-momentum-weightloss’ idea, which we then started testing and practicing as much as possible.

In 2013 – in order to somehow name and teach this “something” – I gave it the name “momentum-based techniques”. A few years later – however, when I thought about it more – I realized that this was not necessarily a stand-alone technique. Although there have been special momentum-coordination techniques since then, many traditional massage techniques can be also used in this way.

This is a method, which can make our work more effective. The momentum – which generated by the movement of muscles – can be consciously controlled; and thus the normotone of a muscle can be influenced so that we can treat it better.

That is why the method became called:

But it was never the names that mattered, it was that this thing worked, and even had much better results than expected. When the procedure was recognized, we also recognized that it can be used not only in a chair and not only in such special treatments. However, after both the developed special treatment strategies and the method of momentum coordination proved successful; I established the Rapid Massage Service after some years of development. In addition to working at events and workplaces ever since, this is also a school where you can learn the Dynamic Rapid Massage, and also the method of momentum coordination. We even provide the most talenteds with occasional job opportunities.

RELATIONSHIP OF BREATHING AND MASSAGE

RELATIONSHIP OF MOVEMENT AND MASSAGE

RELATIONSHIP OF RHYTHM AND MASSAGE

Introduction of the author
Forward to all blogs

Call us with confidence